Half trawler, half motoryacht, Velasco 43 fills a gap in the Jeanneau range, which so far was missing a large boat as much comfortable in displacement as in the plane.

When you try to go for a compromise, it’s easy to displease your customers, on both ends of the potential target. In this case the ability of Tony Castro was to put two souls in one design: a versatile boat, large and livable, fast when it’s necessary to speed up, but relaxing and frugal in all the other cases.
Approaching the Velasco 43, I like very much the lines of the superstructure, with a partially hidden flybridge, the vertical windshield and large windows on both sides. Still I would have preferred to see a more compact bow, close to actual trends and vintage at the same time. Tony Castro opted instead for a sleek design combined with a bulb below the waterline for displacement cruising. I appreciate the choice to move the engines astern and use V-drives and shafts, while the lack of joystick is not big deal on such a boat.

Meanwhile, Jeanneau has introduced the Velasco 43F (see photo), where the sloping windscreen mocks faster motoryachts and deprives the model of her personality. I don’t agree with this choice, although marketing research surely will prove me wrong. 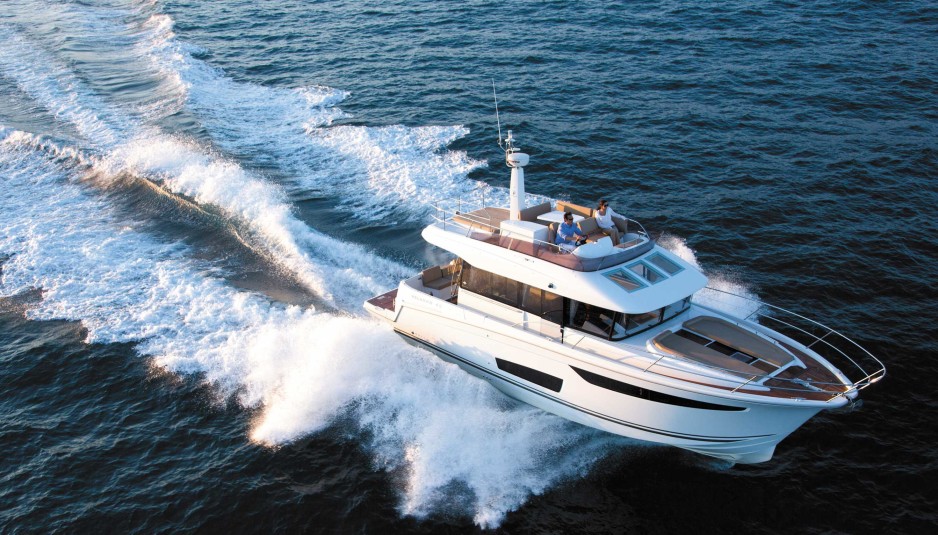 The deck of Jeanneau Velasco 43

It’s probably the best area of the Velasco 43: personality, livability, rationality all merge and don’t hinder the look at all. Part of the merit goes to the two peculiar traits: the tinted “wraparound” windows and the large deck of the flybridge. On the main level, the cockpit offers a good space but the layout needs improvement: there’s a couch but no table, and under the seat the space is used for the propane tank and the life raft. At least, there’s a correctly sloped staircase to the flydeck. As customary for the French yard, the starboard passageway is larger than the port one (31 and 20 cm respectively). Both lead to the huge foredeck sunbed, even larger as the anchor winch is located under the planking, by the chain locker. 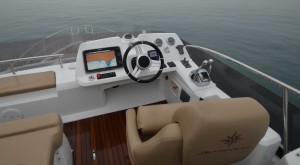 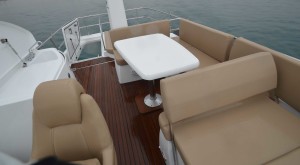 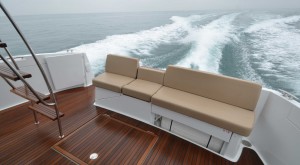 The sun bridge is a world on its own: such a pity that the out-of-season rain spoils my test, still I can try and enjoy the spaces, pretending to relax on a breezy sunny day. For your perfect tan there’s a double solarium abaft, while the dinette and the facing galley offer all the space for recovering after that hard swim. Should you choose to follow the route, there’s a bench by the helm station so the captain can explain you where you’re heading to. Before the low windshield I notice three windows, whose utility I’ll appreciate later.

The four sliding elements of the cockpit window give real continuity between outside and inside, and the portside chaise longue is the best place to stay if you don’t want to choose. Right in front, the dinette can turn into a double berth, and we’re told that on the next units there should be a divider to make it independent from the galley/helm area and have a proper third cabin.
The pilothouse is on the starboard and a side door opens on the passageway, while to the port the compact galley features a window very useful for ventilation. The day is rainy, but the interior light is excellent also thanks to the three skylights mentioned before, right before the flybridge.
Even if the finishing looks good, there’s much fiberglass exposed to the eye, especially by the wheelhouse: wood and leather would have had a better effect. Under the floor, planked rather than carpeted, two huge storage areas can be used for any purpose: laundry with washing machine, pantry, wine cellar, gear storage… Given the size, they would even work as a third cabin, if properly furnished. 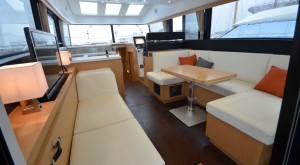 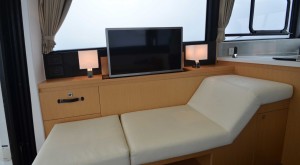 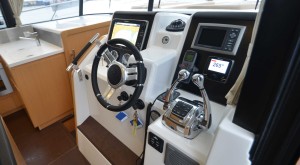 The lower deck hosts two cabins: the master is afore and is dedicated to the owner, while the one for the guests lays on the starboard and features two single berths. Both have their en suite and separate shower box. The fiberglass is visible here as well, but the finish and the light shades dissimulate the nature of the material, and the final effect is not bad.

The test of Jeanneau Velasco 43

For such a multipuropose boat, the speed that the shipyard indicate as “long range” is fundamental, while the top speed means very little. The day in Cannes is rainy, and a moderate swell is not enough to put to test the Velasco hull. I’ll try and cross some wakes to judge the impact on the waves.
The powertrain consists of two 6.7 liters Cummins QSB, 380 HP each, with V-drives and shafts. It’s the only option available, and it perfectly matches with the spirit of the boat: last generation engines, reduced emissions, low consumption, traditional drives. Despite the rearward position, the setup is well balanced, although it’s better to lower the trim tabs some stops to avoid a tail-heavy cruise.
The peculiar shape of the bow seems to work pretty well for a smooth navigation, although the impact is a bit sharp on short waves created by another boat. The Velasco 43 goes to the plane just above 2000 rpm, the speed is 12.4 knots (the said “long range” pace) and the engines burn 68 liters per hour, returning me the same value declared by the shipyard.
Cruising speed of 22-24 knots is around 2800 rpm for a consumption just over 100 lph, while the top speed of 27.3 knots is reached at 3000 revs and requires less than 130 lph.
I move the wheel (the helm is rather mellow) to realize how the turning circle is very good for a shaft-driven boat, while the position of the engines and a clever insulation allow a very silent ride. We’re talking of figures in the area of 70 dB, even lower in the cabins and at reduced speed. 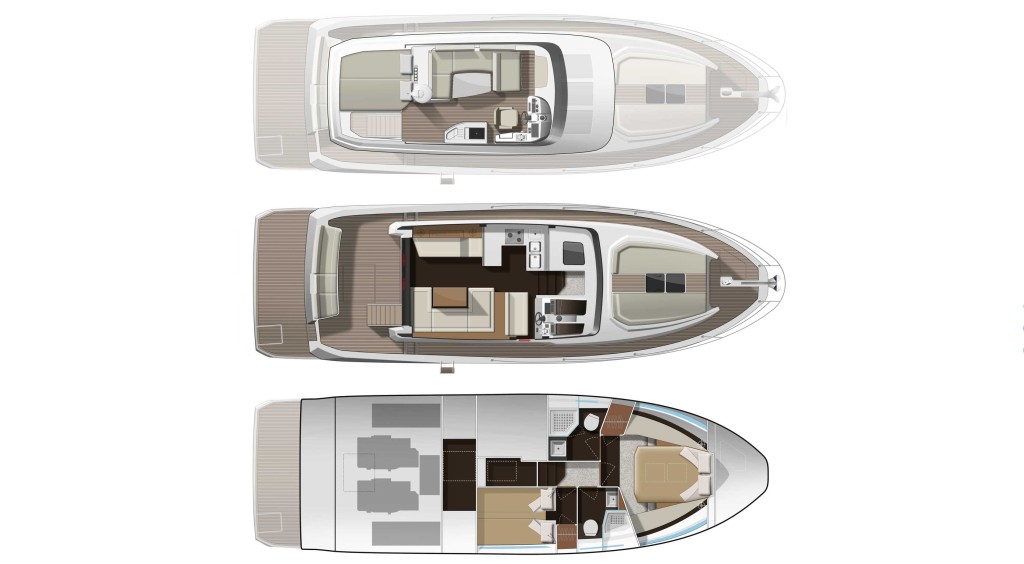 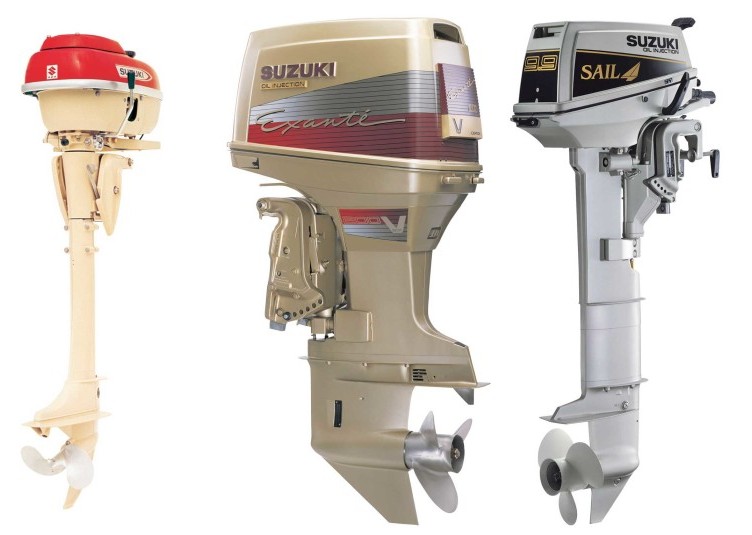 Suzuki Marine at the Genoa Boat Show: between... 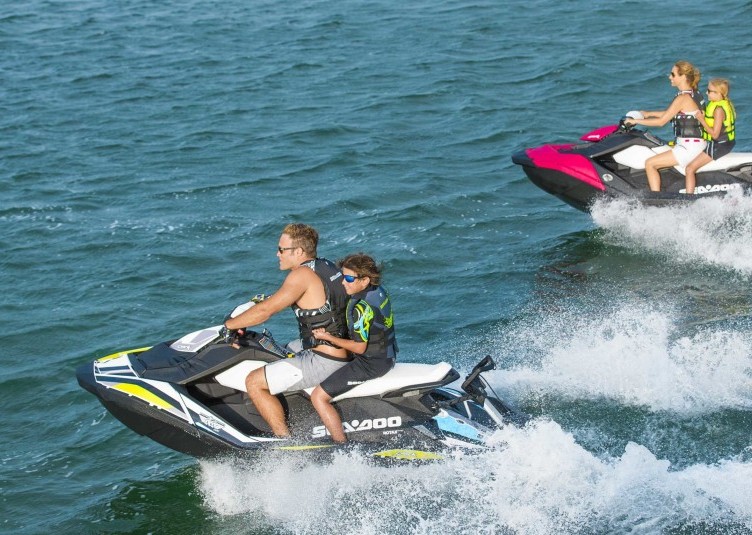 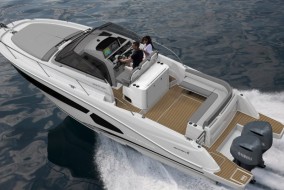 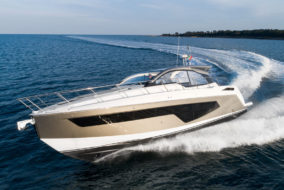 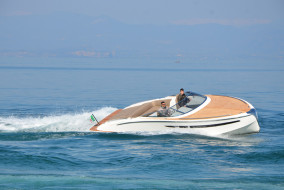