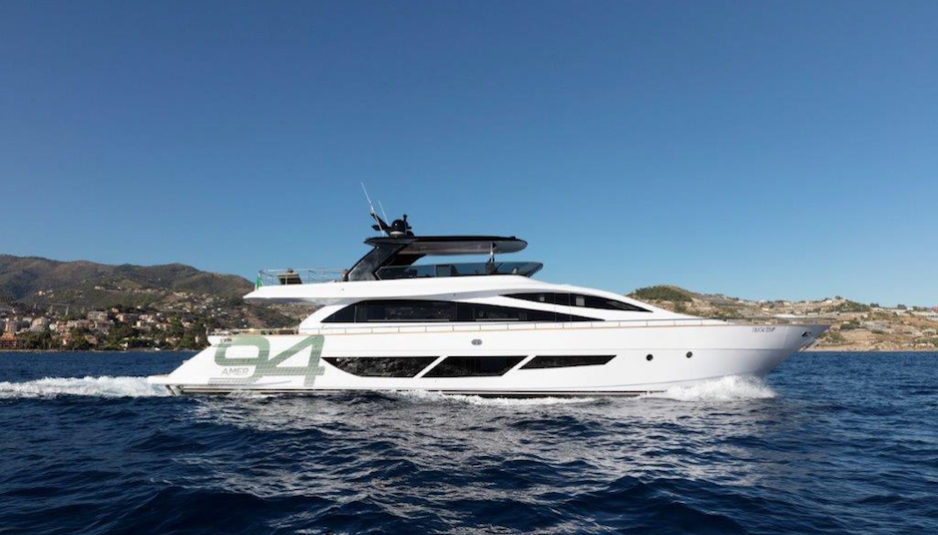 Amer 94 Superleggera: Amer and Volvo use their technology for the environment

Who can afford a superyacht should have no trouble in filling up the tanks with diesel any time they want. So, why even the superyacht world is going towards reduction or cancellation of the amount of fuel burnt? For the environment. Less fuel means less emissions, both in the water and in the atmosphere.

Unfortunately ecology won’t be the driver in chosing a yacht, at least so far. Still, the issue has become important in the boating business, at any level, and we can’t overlook it.

The shipyards that today offer diesel-electric or “full electric” hybrid propulsion know this well, and even marine engine manufacturers are planning new-generation hybrid engines; the most recent case is Volvo Penta: in an announcement they set the 2021 deadline to launch a whole range of hybrid motors based on the Ips group (read here).

So, what’s inside a green superyacht?

The people at Amer Yachts and Volvo Penta have explained it to us and walked us aboard a brand new, very special version of the Amer 94 Superleggera, a 28.5 meter unit designed to save as much weight as possible. 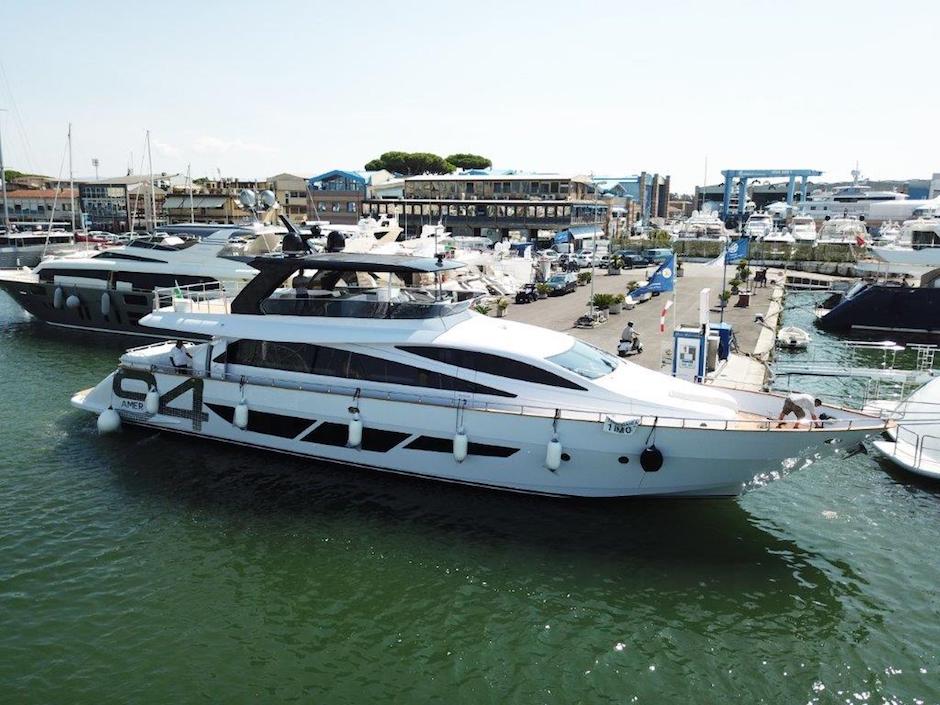 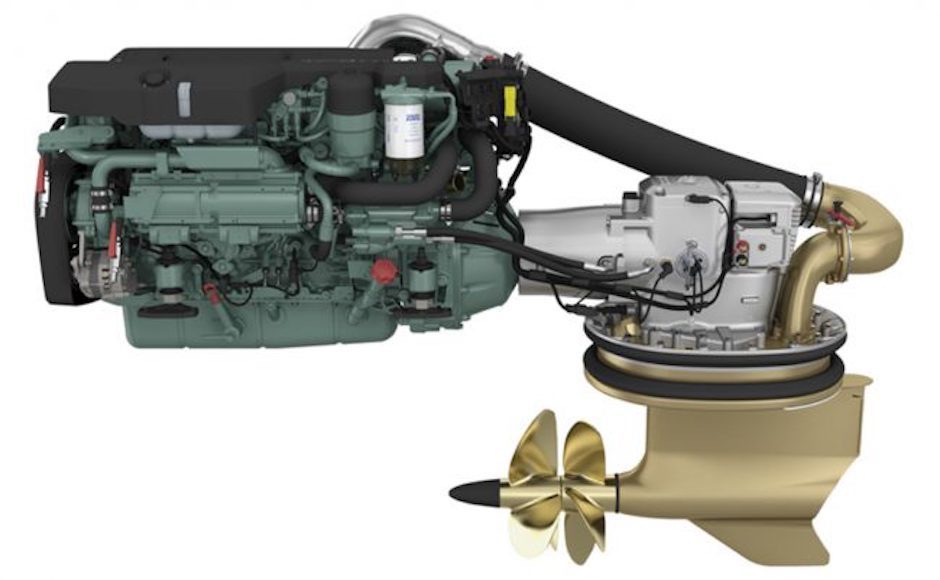 A lighter boat means less power to get into planing: in the engine room of Amer 94 there’s, for the first time on such a long yacht, only two 1000 hp Volvo Penta Ips1350 engines. The standard version of the yacht uses three 900 hp Ips1200 units.

The result is clear: 20 tons of weight have been saved (from 80 to 60), and the top speed reaches 28 knots. More, the thrust during acceleration can be perceived clearly, while the fuel consumption drops. This has all been certified by Rina, the same institution who awarded the Amer 94 Superleggera with the Rina Green Plus certification and the highest score in her category: 147 points. 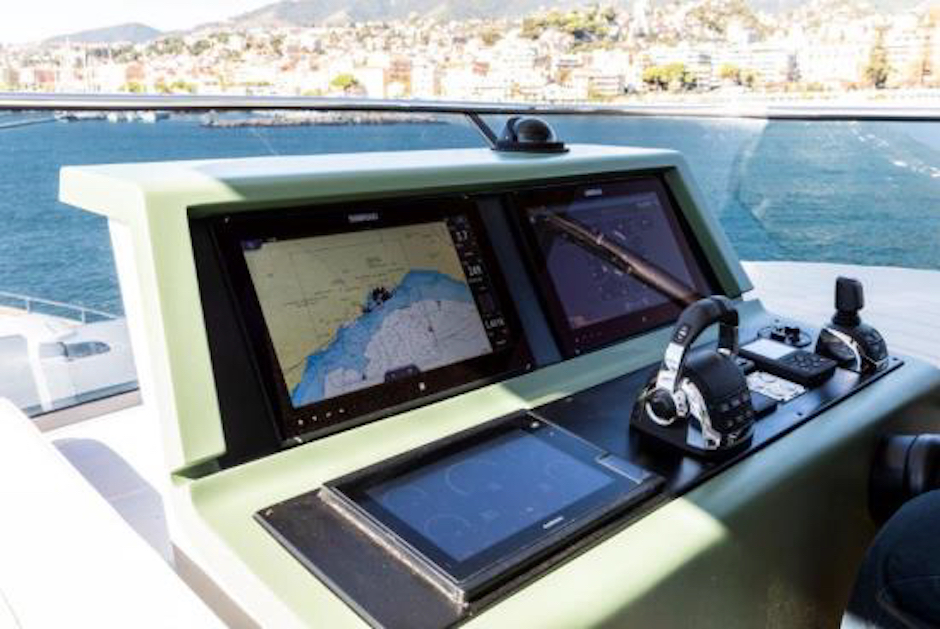 Who’s behind this operation? We can say both the companies. On one side the Amer Yachts shipyard, under the direction and will of the owner Barbara Amerio, is gradually taking the environmental issue as an essential mission in their activity. An indicator of the courage and determination on this path is the fact that Amer 94 Superleggera has not been built on demand for an owner: the financial effort is on the shipyard. 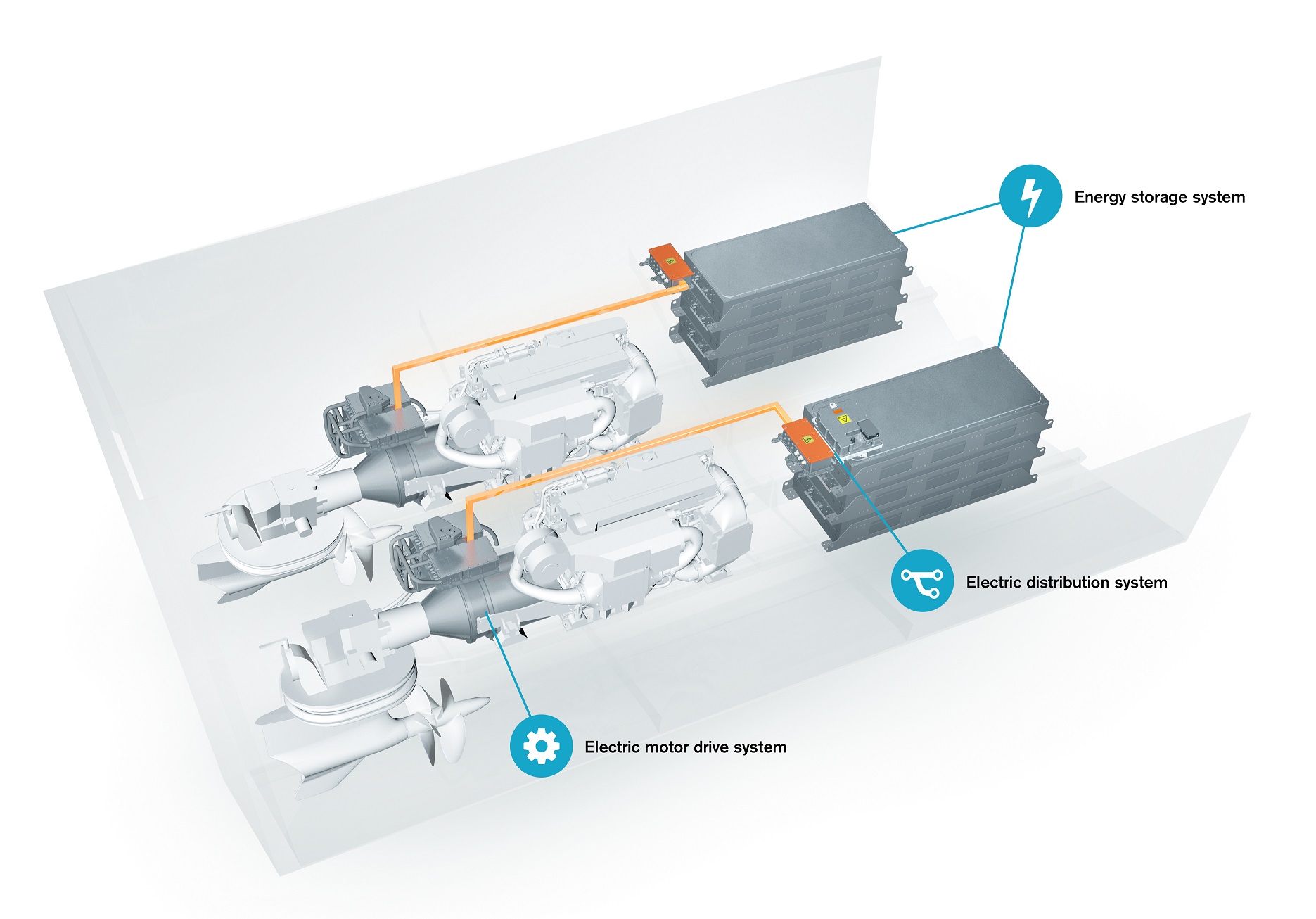 On the other hand there is a big company such as Volvo Penta, which created Ips 12 years ago. This technology, as we all came to know, uses pulling pods instead of traditional shafts: this allows, among other advantages, to grant the same performance you could have only with much bigger motors. For example, the Volvo Penta Ips500 uses two 370-horsepower engines but can deliver performances comparable to twin 500 hp motors with shafts. As for the top of the range on Amer 94, the new Ips1350, mounts two 1000 hp engines.

The performance and fuel economy figures of Amer 94 Superleggera

Given the same performance, smaller engines allow a fuel saving reckoned by Volvo Penta in no less than 30%. If then these engines should be housed in a motoryacht that has four elephants less to carry (well, the equivalent in weight), the result is a higher percentage of savings (see chart below). Cut 700 hp (the difference between 2 × 1000 hp and 3 × 900 hp), and this only reduces the top speed by two and a half knots: 30.4 knots for the standard version and 28 knots (at 2360 rpm ) of my test on Amer 94 Superleggera during a press event with 20 people on board, plus a musician playing violin and guitar to point out how quiet the engines were. 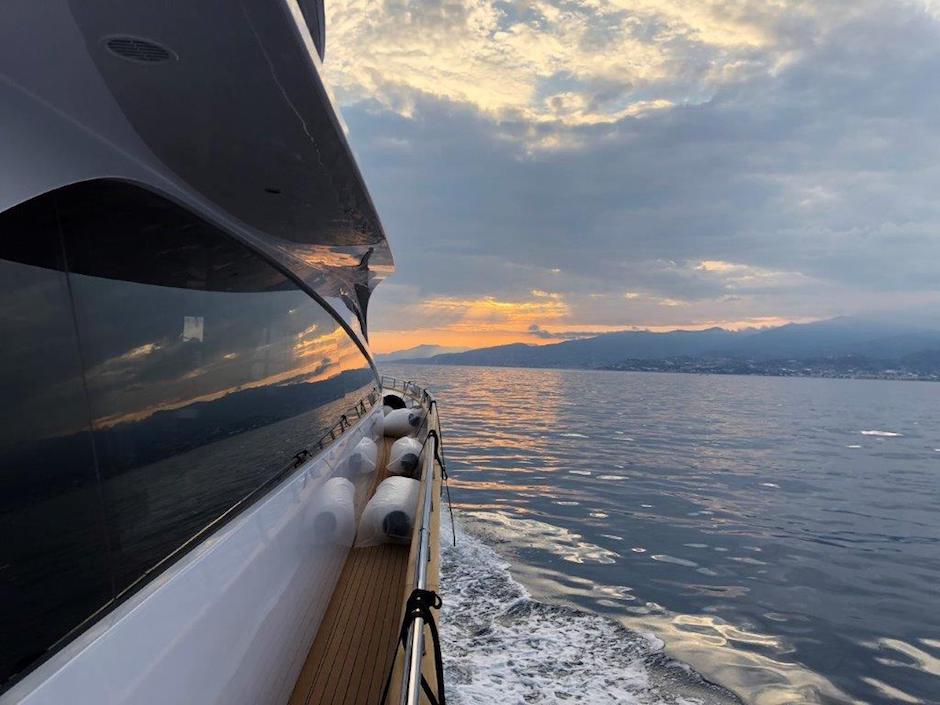 So, how did Amer Yachts cut 20 tons of weight without sacrifices?

They have done a very careful job in choosing materials, not only for the furniture but also for the structure and plant parts. The materials come either from recycling processes (such as the high-quality Sumbrella exterior fabrics) or have been picked for their natural lightness: this is why the boat is built with vacuum infusion and uses cork tops instead of teak for the flooring, the flybridge furniture is made in Eulithe (a rigid foam derived from a thermosetting polyurethane polymer), and the interior ones are made in lightened wood.

Look at the salon and you will realize
that nothing is missing: sofas, furniture,
shelves, dining room with table and chairs…
yet you have that feeling of depth typically
given by the unencumbered spaces

And then there’s the flybridge dashboard made in ABS (a thermoplastic polymer), printed in 3D by a hi-tech company that works in collaboration with the University of La Spezia, or the pilot and copilot seats made in fabric rather than cuhions (they are still very comfortable), and much more. 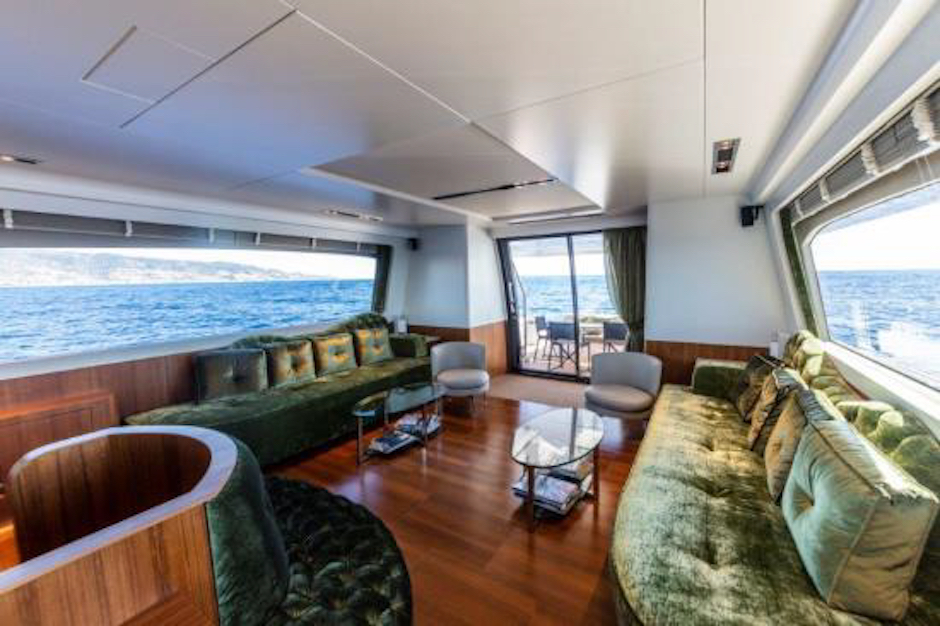 Even the onboard layouts are designed for maximum lightness. Look at the salon and you will realize that nothing is missing: sofas, furniture, shelves, dining room with table and chairs … yet you have that feeling of depth typically given by the unencumbered spaces. Beside the style of furniture that everyone can customize, this is the result of an accurate arrangement of the accessories, put in the right places, and of the removal of anything was deemed superfluous (watch the video).

A 100-mile test on the Viareggio-Sanremo route

A respectable speed when compared to the large cut of hps in the engine room, and a significant drop in consumption.

Rina (Italian Naval Register) has certified it by sending an officer on board the Amer 94 Superleggera during the 100-Mile Challenge from Viareggio to Sanremo, which was undertaken to ascertain the consumption figures. The Rina engineer has certified the consumption at 4 different paces, which you can ead in the table below: displacement, economic cruising, fast cruising and maximum speed (here no more than 26 knots). 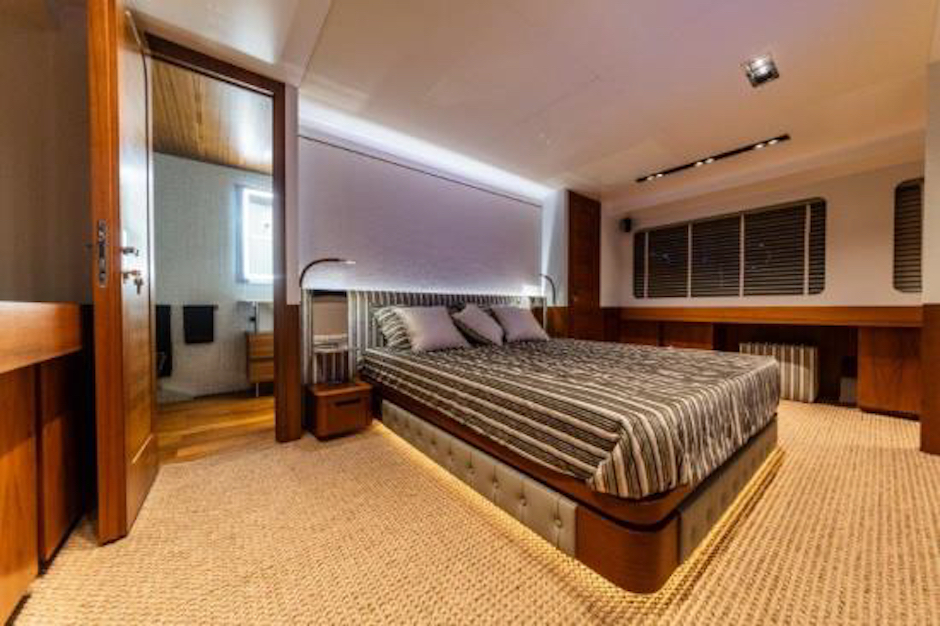 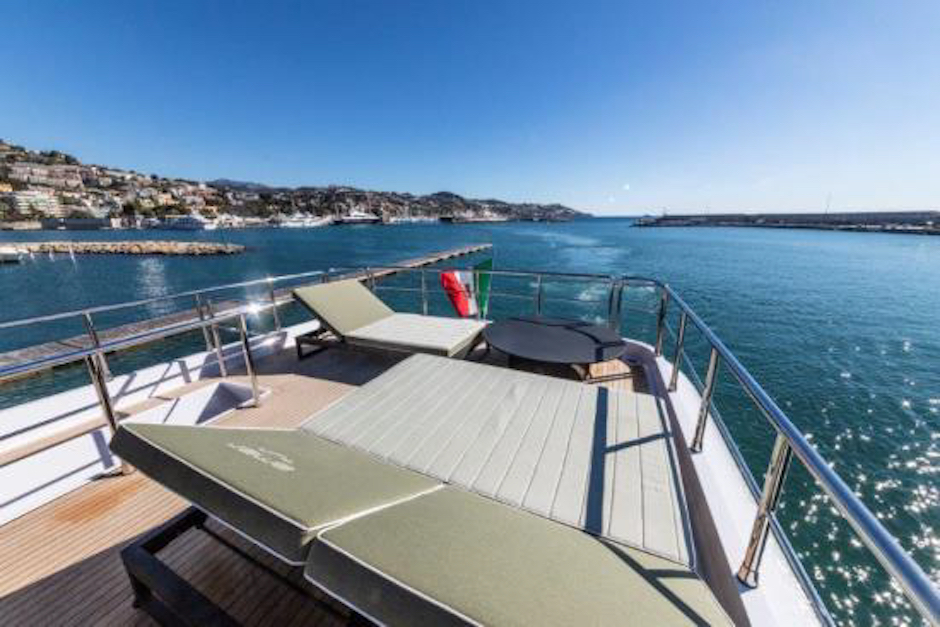 To better highlight the fuel economy, the table shows the percentage of savings between the Amer 94 Superleggera and traditional motoryachts (with shaft drives and the average displacement of a 28-meter motoryacht).

Speed and fuel saving in %

The numbers of Amer 94 Superleggera 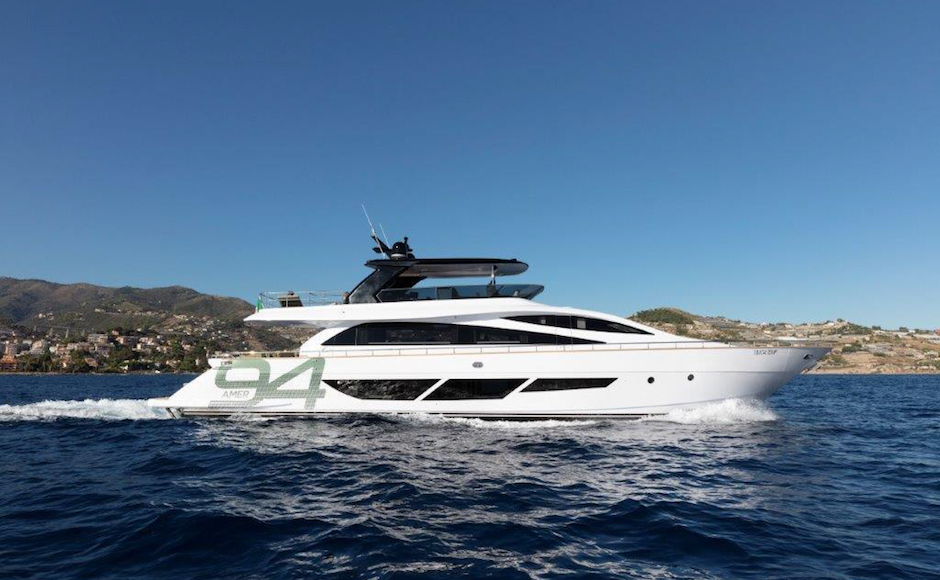 Although this is a virtuous example of how the industry can be environmentally friendly without sacrificing anything to comfort and performance, emissions are not the only threat to the sea. There is a much more dangerous and subtle enemy: plastic, a true killer of marine fauna, or rather a weapon whose power is frequently underestimated. And let’s keep in mind that the real killers is us, humans, who continue to get rid of plastic where we shouldn’t. But this is another story, one that we will tell you soon. 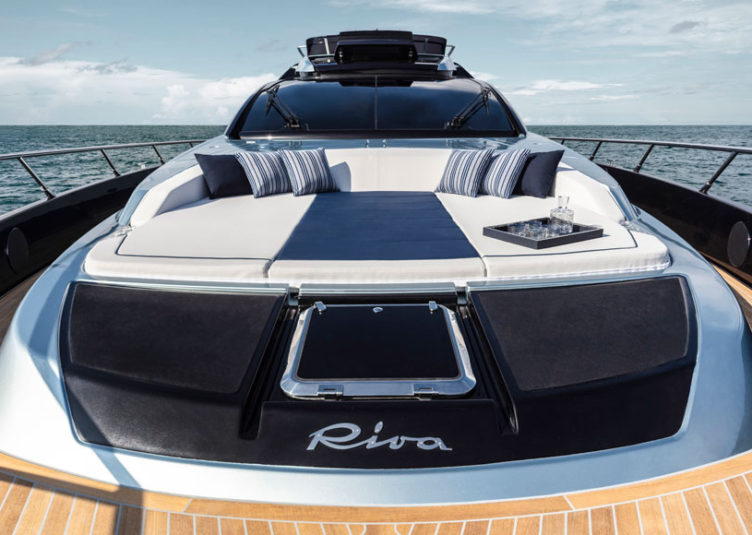 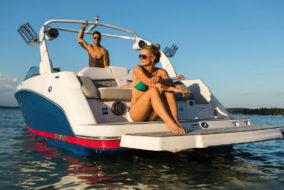 New for 2018: the “American way of boating” by Four Winns gets to Europe with four new models 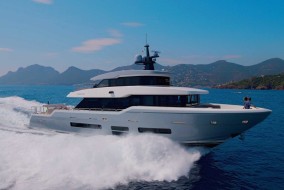