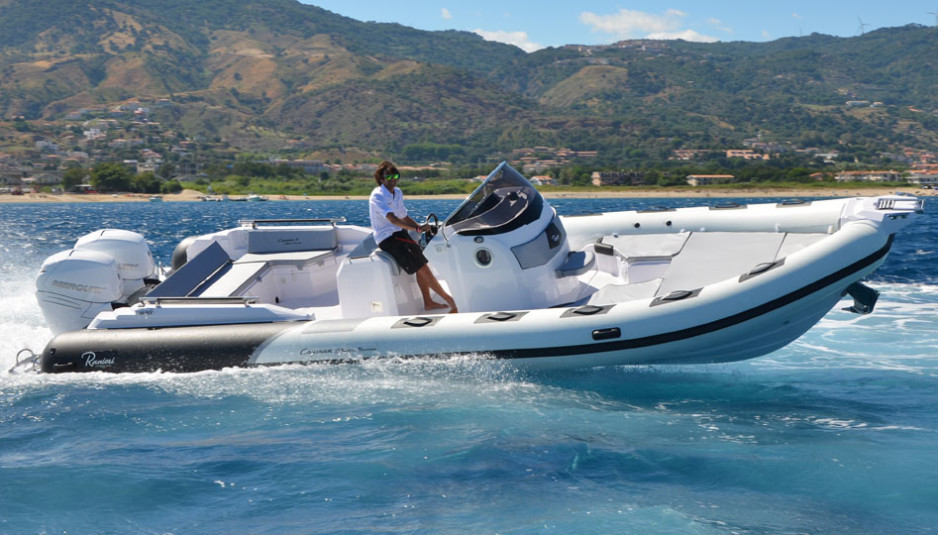 Cannes has been the debut stage for Ranieri Cayman 31 Sport Touring: with this model the Italian yard completes their range, aiming to redefining the parameters of prestige ribs.

What should a large rib be like? Comfortable, versatile, spacious enough for guests and sport gear, refined. All these factors have driven Ranieri International in designing the Cayman 31 Sport Touring. We will see (many) in the water in summer 2016.

Ranieri Cayman 31 Sport Touring is intended for daily cruising, so every aspect follows this input: large open space, a versatile layout, and different solutions for comfort and fun.

On the 31 ST you will find two solariums, two kinds of dinettes with a complete wet bar / grill, and a protective helm station where two control the engines from. In this case propulsion is on two Mercury Verados, 300HP each. As an option, a folding bimini top covers the cockpit without being in the way when not in use.

The two solariums are quite large: 200×163 cm for the one abaft, 210×226 for the bow one. The latter can turn into a dinette by using the extension as a table, taking advantage also of the front-faced bench ahead of the console. 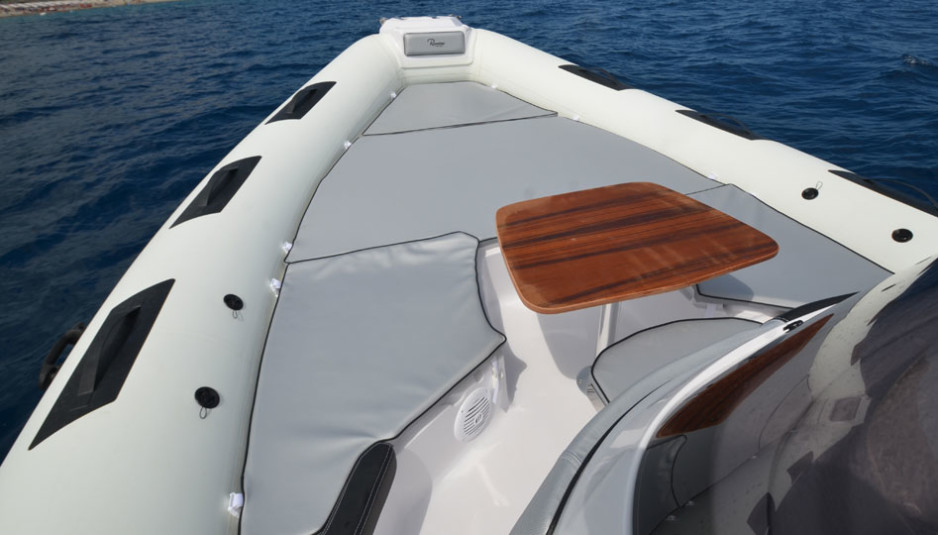 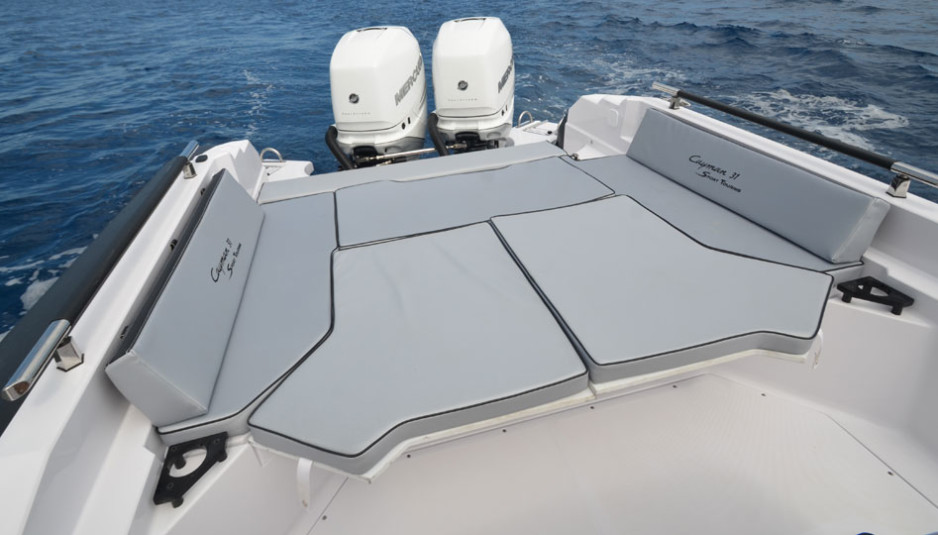 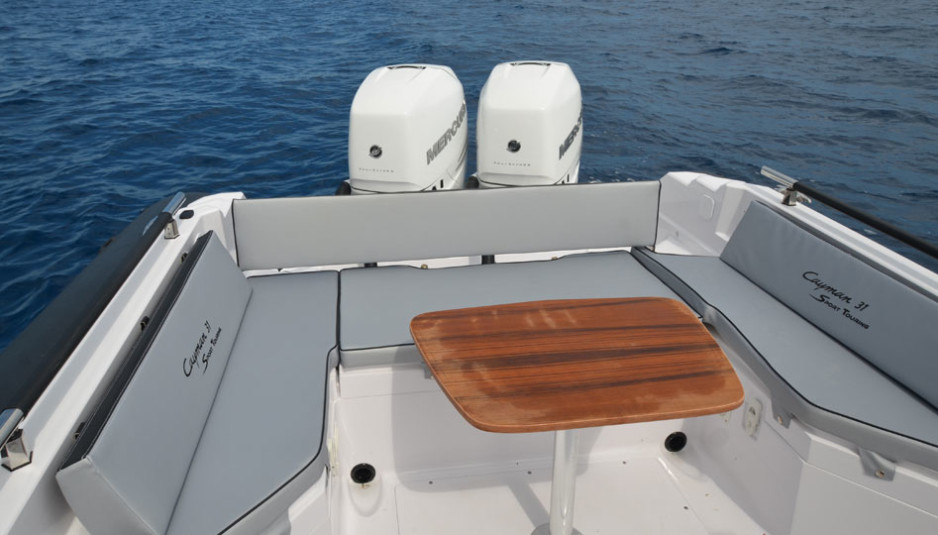 Same happens astern, where another extension can be stored in the big lazarette where the tanks and the batteries stay, to be replaced by a table. A fine touch comes from the leather-covered handrails, while the cushions are very well kept in place as they don’t move even at 50 knots.

The dashboard sports a nice look and an efficient protection, with the windshield framed by a steel handrail which comes handy during fast navigation. The Mercury analogue gauges are well integrated and leave space for a GPS plotter. The companion door leads to a small yet refined cabin with hidden potty. 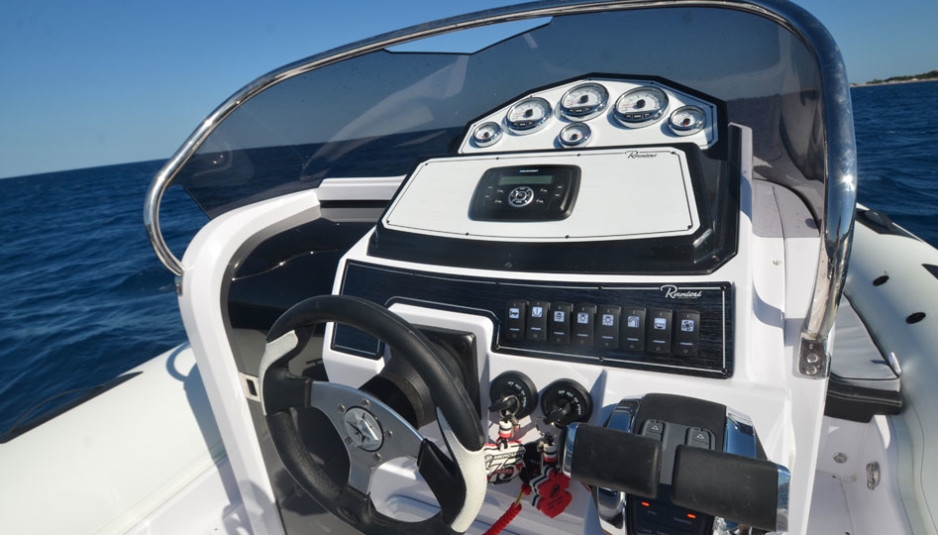 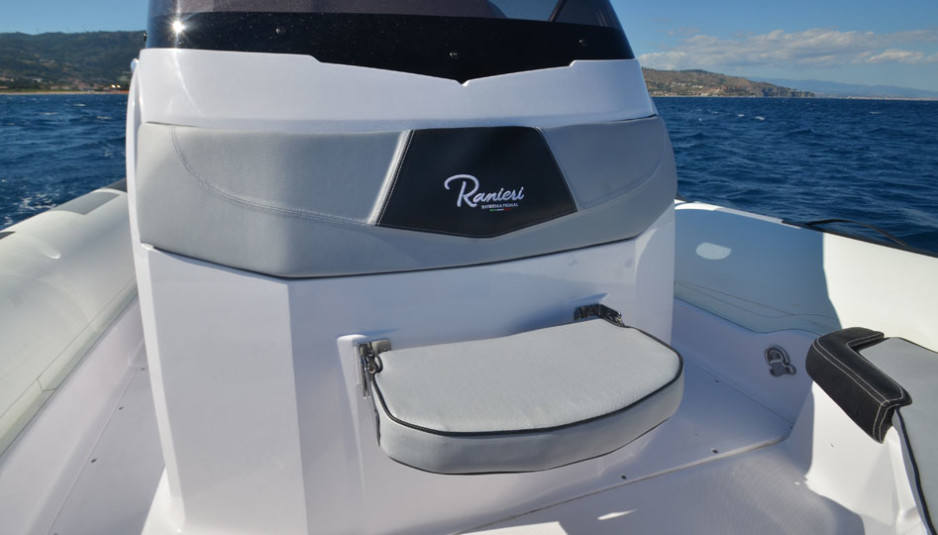 Finally, I take a look at the several lockers, which feature a lot of space and a counter-molded finish inside so to make the structure sturdier and have a clear and even look, also useful when they need to be cleaned. 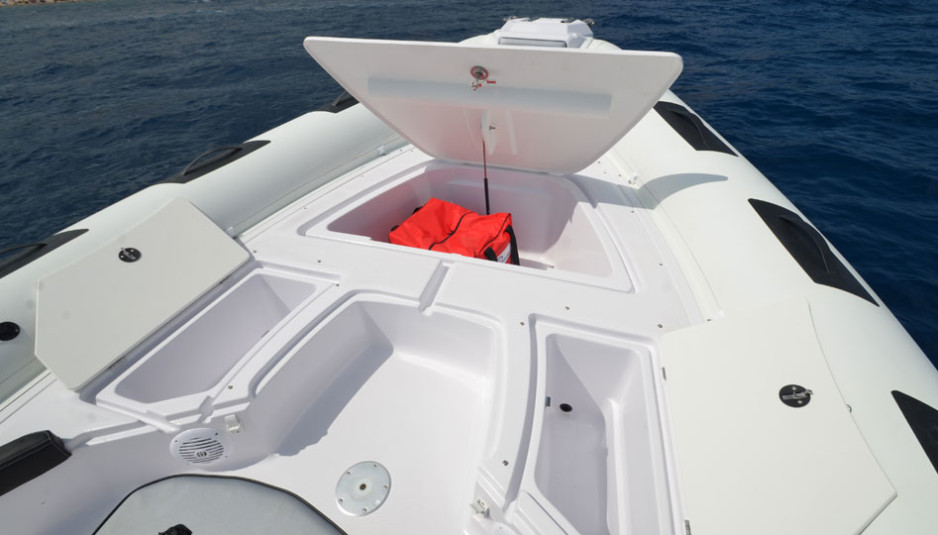 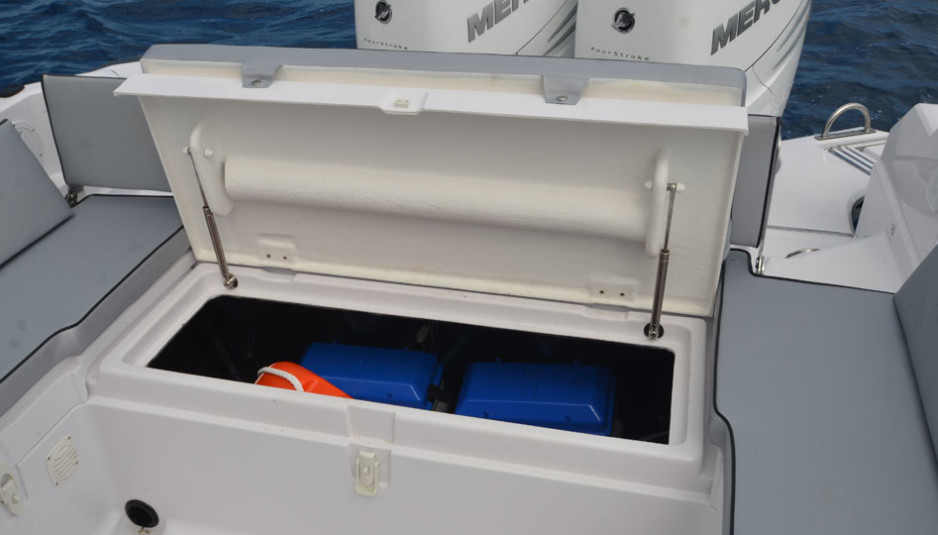 I had two sessions of tests in Southern Italy, by the  HYPERLINK “http://www.ranieri-international.com/” \n _blankRanieri International premises. Of the two, the first is the one I’m taking into consideration here. Although the sea was rougher and the instrument to measure fuel consumption not installed, the mount of the engines was lower than the second day and it proved to be much better than the second-day choice. The propellers are two four-bladed, 21” Revolution4. 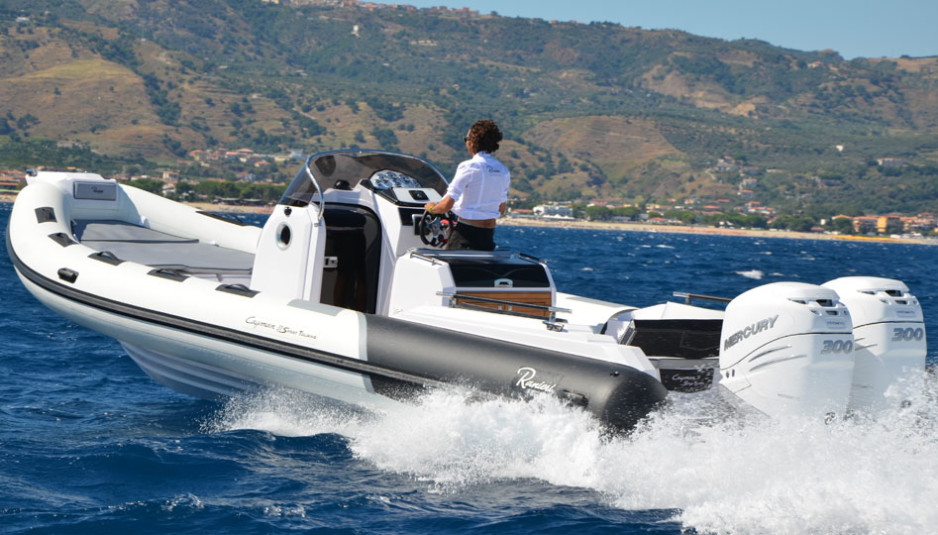 The Ranieri Cayman 31 Sport Touring (with twin Mercury Verado 300) gave the best: 53.4 knots on a choppy sea, with strong wind, didn’t hinder the handling and stability. Even the tightest turns were precise with a talkative response from the wheel, and the throttle levers were easy to control and immediate in the reaction from the engines.

On the second day I collected other figures. First, the planing speed, which is 3.5 seconds in normal conditions and gets to an excellent 6 with just one engine working. Less than seven seconds (6.8) are needed to reach 30 knots, while minimum plane is at 2200 revs and 14 knots, for around 30 lph. With the engines in the higher position, our top speed didn’t reach 50 knots, with 49.6 being our best read. 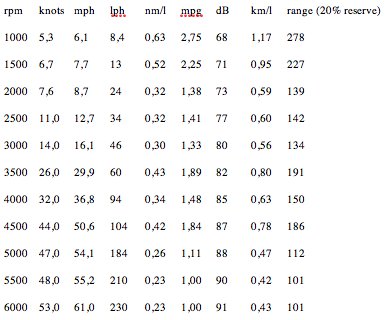 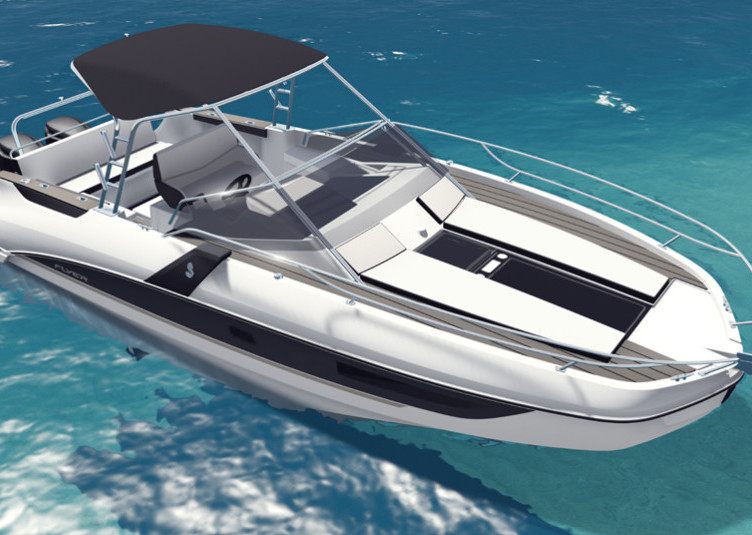 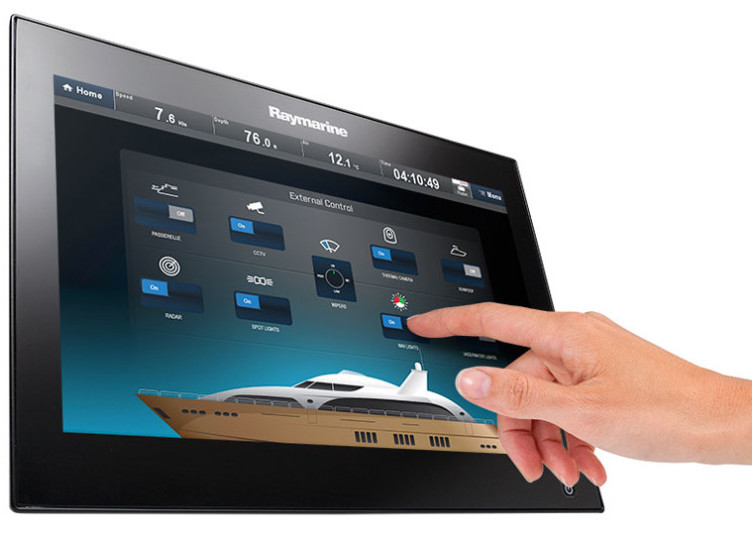 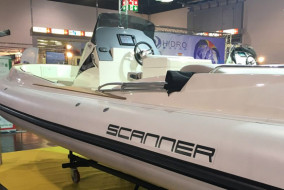 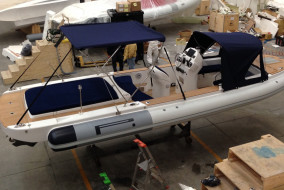 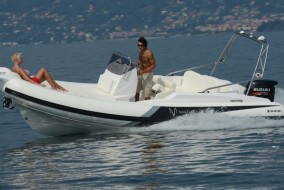 Makò 68 with Suzuki DF150TG a package of technology and versatility