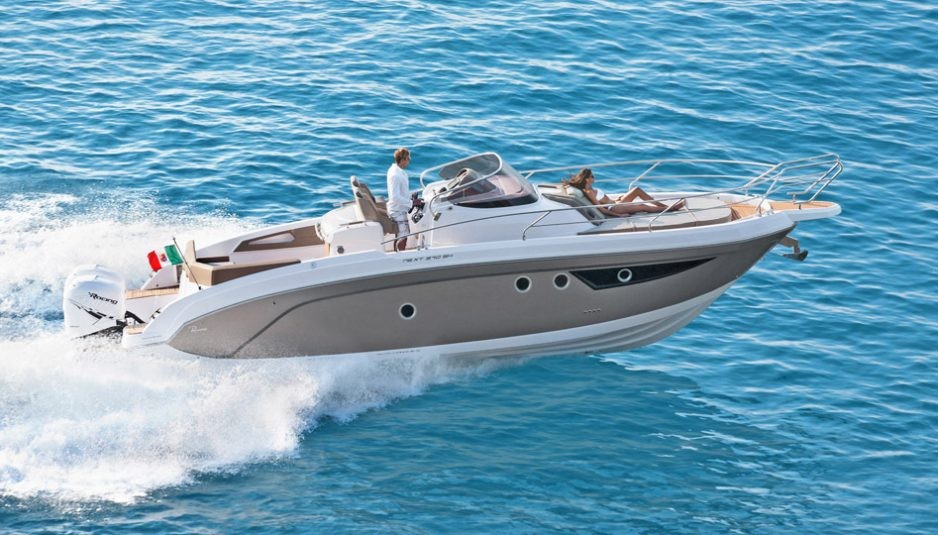 The first unit of  Ranieri International Next 370 SH, 11 meter cruiser built in Italy, achieved a very high score in our sea trial.

Even if Ranieri International is one of the main player for big-number crafts, going for the first time above 11 meters is a hard challenge. Build quality and finishing care are common to them, and the Cayman range proved how they can think big (although those are ribs).  The debut of Ranieri International Next 370 SH came as a graduation thesis for the boatyard located in Soverato, Southern Italy.

Ranieri International Next 370 SH: the deck

When in front of a blank sheet, ready to gave birth to a 37-footer, designers had two possible paths to take: replicate known choices, or try and say something innovative, both for the look and for the construction technique. The went for the second indeed, and here we have Ranieri International Next 370 SH, which thanks to the build quality is certificated A in the design category. 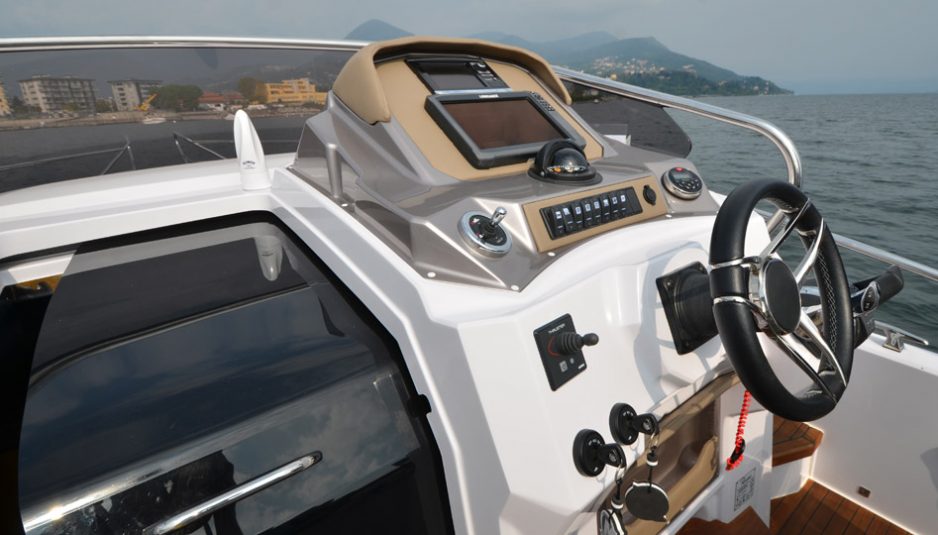 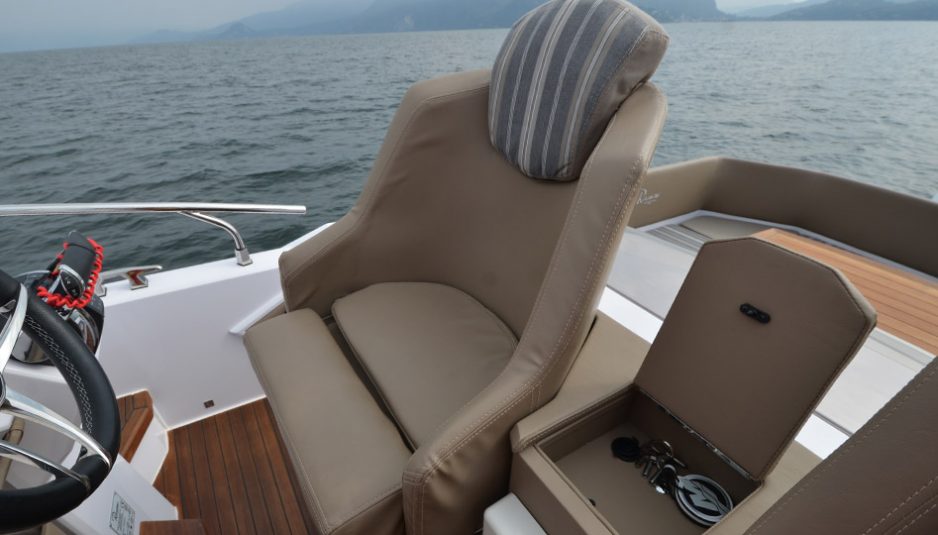 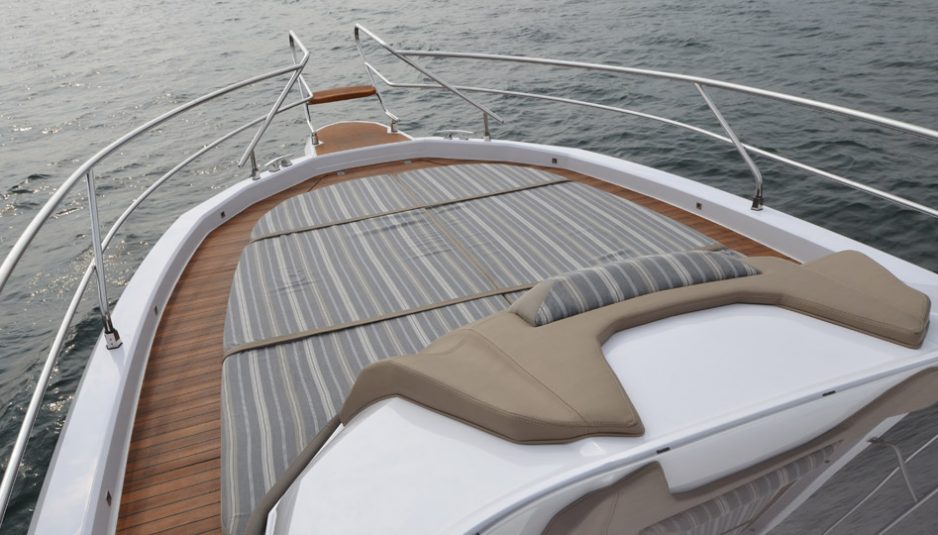 The construction is characterized by a peculiar coupling between the hull and the deck, consisting of resin coated polyurethane “bags” injected with foam, on which the deck lays for a kind of “silent-block” effect, which makes the structure more elastic and compact at the time same. In addition, the double-stepped hull reduce water drag, then again the “diamond” bow allows to enhance volume in this area, both outside and inside.
Beside innovations, what I like about Ranieri International Next SH 370 is the ability to propose innovative solutions on a very classic layout. Dinette, grill, chairs and dashboard are where they have to be, built with great care as the rest of the details: lockers, seatback of the bow solarium, wraparound windscreen. Also the topsides look cool: in addition to the aforementioned “diamond” bow, there’s some nice graphics, with a sloping profile towards the stern and a dark element connecting the portholes. 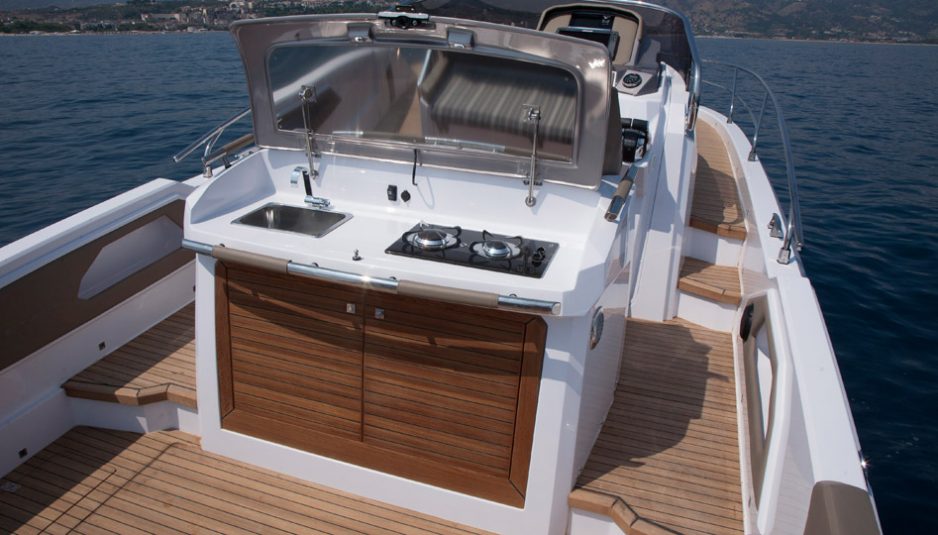 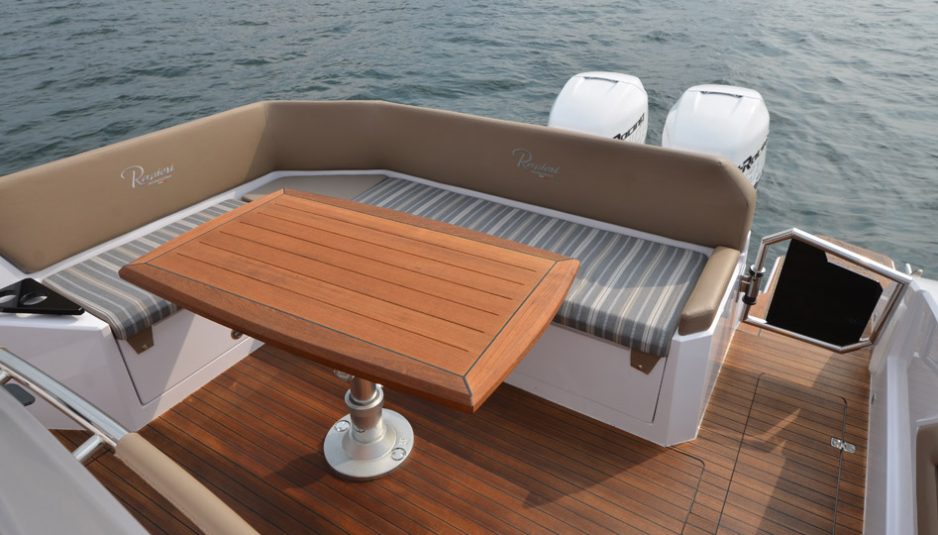 Given for granted that the customization possibilities are many, I like the internal layout solution with toilet and shower in a room and sink in a separate one. Perhaps the forward cabin (which becomes a dinette) could have been open, to make the corridor a bit less cramped. The port cabinet can be set with a second galley, while under the ladder stretches a wide double berth, which can even be converted into two single beds even leaving a passage in the middle.
Talking of build care, the seats have a fiberglass core covered with closed-cell foam: same as the exterior ones they don’t absorb water, although their design is not the best ever seen. 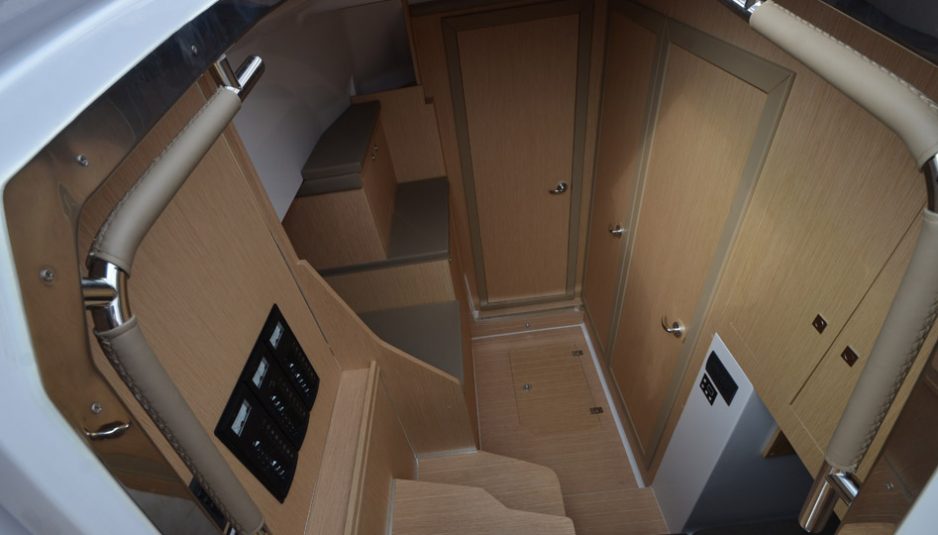 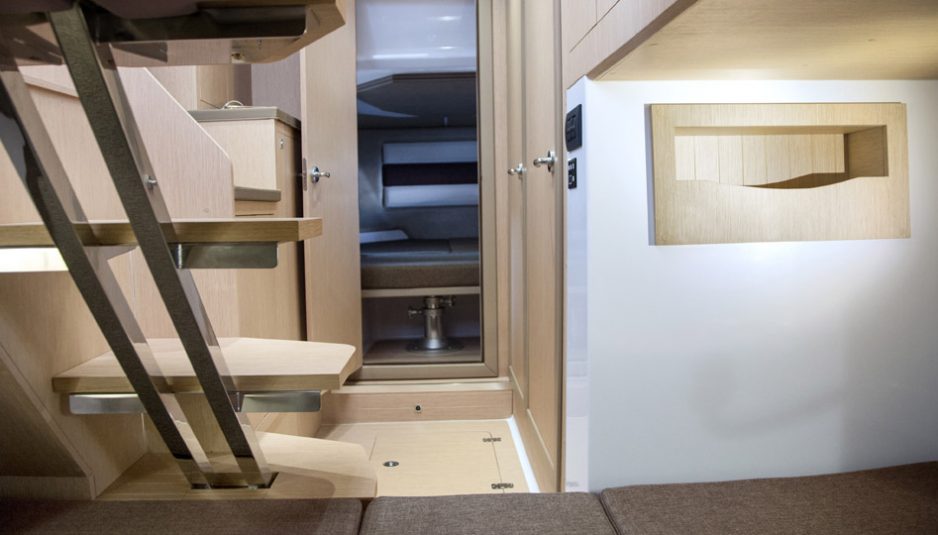 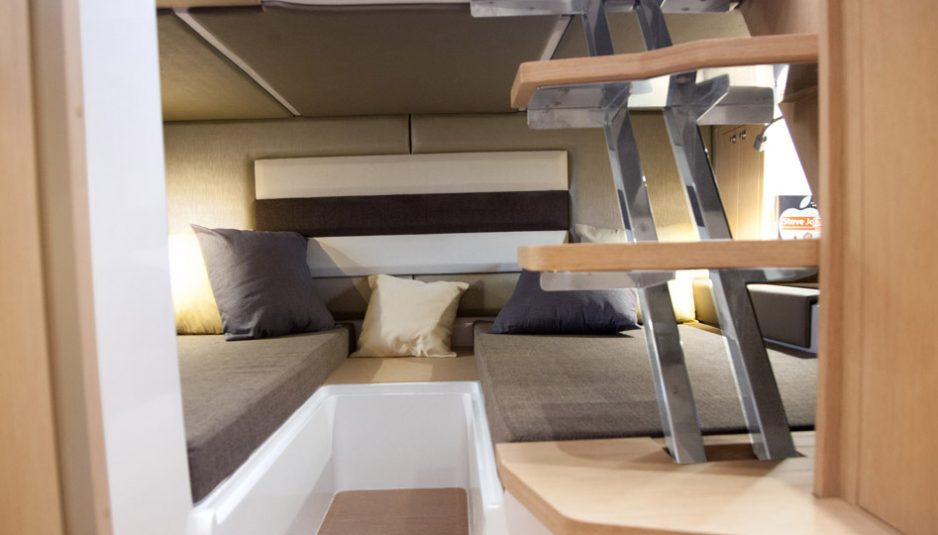 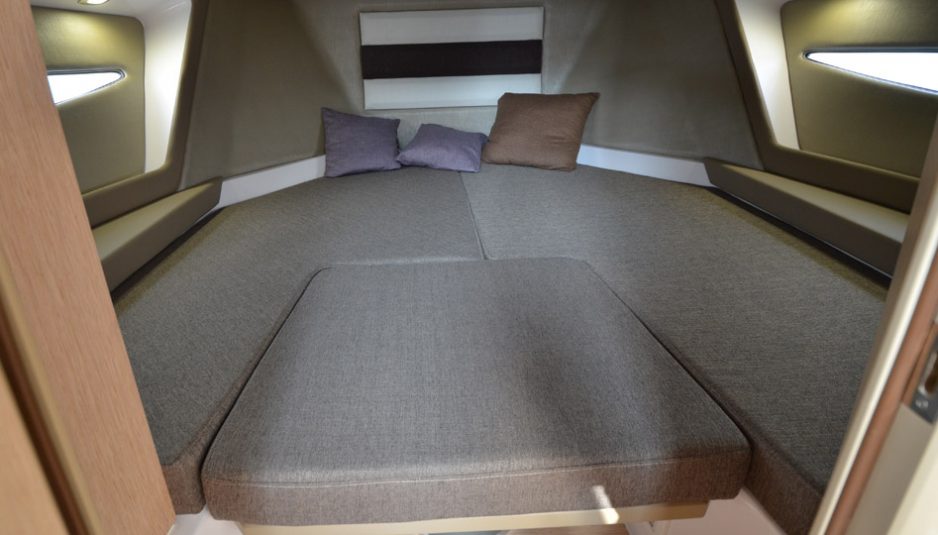 Ranieri International Next 370 SH: the test

The best is yet to come, from Ranieri International Next SH 370. We leave the dock in Verbania on Lake Maggiore for our test. The boat is powered with the top possible option: 800 HP from two Mercury Verado 400R coupled to 15” three-blade Enertia propellers. The first feeling is that less power wouldn’t affect the fun: acceleration is scorching, 3.8 seconds to get to the plane and 22″ to touch a maximum speed of 44.3 knots, despite being five passengers with full tanks. It’s numbers seen on fast cruisers, very fast indeed. A pair of Verado 350 for this Ranieri International Next SH 370 would not be a stopgap solution.

Beside acceleration, it’s worth to mention that fuel consumption is not excessive at high speed and becomes very reasonable between 20 and 25 knots, which can be taken as the cruising speed. The minimum plane was held at 3700 rpm with a consumption of 67 liters per hour for a speed of about 16 knots, so even if you want to cruise on a budget you can. During our test we used the trims from 6500 rpm up, allowing us to reach the top speed. There’s also the trim tabs, although we didn’t feel the need: but they may be useful to balance an uneven load on board. At low speed Ranieri International Next 370 SH is remarkably steady, a feature that will be appreciated when relaxation in some cozy bay, and at the same time seaworthiness at high speed is excellent: no sudden maneuver undermines the boat balance, and directional stability is flawless. If I were to give a mark, this would be a full score.

The numbers of Ranieri International Next 370 SH 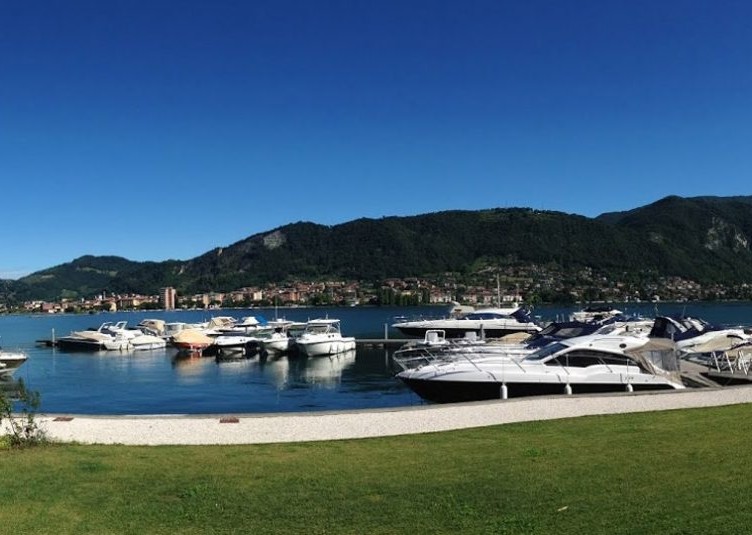 Lake Iseo is still in the spotlight with Nautca... 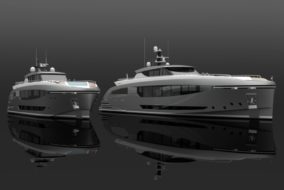 Montecristo 30 and Montecristo 43: the “pocket” superyachts, according to Tommaso Spadolini 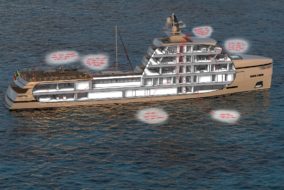 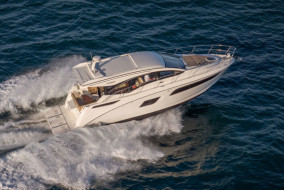