Capelli Stradivari 43 is born, and it’s a collaboration with the most famous lutherie in the world

The new maxirib of the Cremona, Italy shipyard is called Capelli Stradivari 43, with the reference to one of the excellences of that city. It will be powered by Yamaha like all Capelli crafts.

Some say that Cremona is famous for the three T’s (you can easily search the meaning on the web), but one of the excellences of the Lombard city is undoubtedly the Stradivari lutherie. From the workshop founded at the end of the 17th century by Antonio Stradivari came some of the most “perfect” violins ever built, most of which are still existing and played only on special occasions and by world-famous maestros.

Cremona is also the city of Cantieri Capelli, which therefore wanted to pay homage to the most famous name of its territory by presenting the Capelli Stradivari 43, a 13-meter rhib built with the collaboration of Lombard lutherie.

Between a rib and a violin there are few points in common, it is useless to look for them. Unless you want to use the abused expression that speaks of research, quality and attention to detail. But I dare you to find any company stating that they have no attention to detail. Therefore it makes more sense to say that Capelli and Stradivari worked on the concept, on the study of the sinuous and soft shapes of the instrument in order to integrate them with the technical needs of the boat.

For the moment the Stradivari 43 has not been presented to the public in the usual (and complete) way. However, it was revealed in an evocative event, in the City Hall square of Cremona.

Exposed and illuminated in the middle of the piazza, the large rib was the protagonist of a spoken story of its evolution and what it intends to evoke. Along with it, the notes of a Stradivari violin played by Lena Yokoyama have given great emotions to those who know how to grasp the intrinsic and sonic value of such a performance.

As usual, at the stern of the Capelli 43 there were two Yamaha outboards. Given the caliber of the project, they could only be the top of the range from the Japanese manufacturer, namely the 425 hp 8-cylinder XTO. The promise is that of a performance of absolute importance, even if the notes will be a little different from those of a violin over 300 years old.

Capelli Tempest BR 65: a new kind of hybrid is born

Capelli Stradivari 43 will be presented with a streaming event on social channels during the summer, and will then be launched with media and public at the first shows of the 2022 nautical season: Cannes Yachting Festival and Genoa Boat Show. 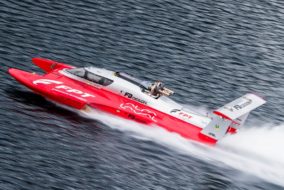