Azimut Grande S10: the innovative yacht is born from the freedom of design

She’s a sportboat, but also a 28mt flagship for luxury cruises. Azimut Grande S10 sits at the top of the open yachts “S” range, but also belongs to the “Grande” series, the largest units of the shipyard.

The fathers of the new Azimut Grande S10 are Alberto Mancini, who created the exterior design, and Francesco Guida, who oversaw the interiors.

With this new flagship Azimut Yachts play the highest card of their 2020, which also include the S8, the 78 Fly, and the Verve 47. She pushes the limit of the S range, which is now available in four models between 18 and 28 meters.

The Azimut Grande S10 breaks traditional patterns and offers an original and very versatile layout on the main deck, thanks to two retractable glass doors that allow to isolate or open the areas creating different atmospheres.

The cockpit is split into two areas on different levels, further aft there is a raised solarium lounge with a glazed parapet, which acts as a link with the sea, while at the level of the inner salon there’s a protected lounge with forward facing sofas. In the lounge, the dining are is by the entrance and the dinette, behind the driving console, in a reversed layout compared to what we are used to seeing.

The first sliding glass door separates the patio from the internal dining area and, once opened, transforms these two areas into a single al fresco space. The second door, slightly curved and in the center of the hall, can separate the internal sitting room from the dining room.

But let’s be guided through by the two designers, Alberto Mancini and Francesco Guida, to see how the Azimut Grande S10 is made.

Alberto Mancini: the importance of feeling free to create

“In designing the Azimut Grande S10, I felt totally free to create, without any particular parameter or constraint, apart from the values of length and width”.

The first inspiration for her design came from the architecture of a villa on the sea in Malibu, California, with the terraces that gradually descend until they reach the shore: from this vision originate the three levels which include the fly deck, the main deck and the swimming platform completely open to the sea.

The core of Azimut Grande S10 is the cockpit divided on two levels: an aft area characterized by a flush deck, similar to an overhanging stage that looks towards the sea, and a more reserved area.

The ladder was positioned like a carbon spine in the center of the cockpit.

For the superstructure I wanted to study the details of the horizontal surfaces, in order to manage the slender profile of this S10 which, despite being a boat on three levels like a villa by the sea, still has a sporting soul, strongly linked to the DNA of Azimut.

“The use of this material – Alberto Mancini says – has translated into the desire not only to create, but also to reduce. The elimination of steel railing, for example, has allowed us to develop a totally different profile, compared to the open boats seen so far, thanks to the introduction of a sort of bow rifle, which contains and slims the yacht lines and allows to create a carbon and fiber optic handrail“.

The lighting design of this model is based on a few clean elements, which at night give an exclusive character to the profile of the boat and reinforce the Azimut brand with the aft lights and steps, conceived as if they were the front lights of a modern car that light up creating subtle cuts of light.

Francesco Guida: here’s how I multiplied the space

“The challenge for the designer who ventures into a project for Azimut Yachts is that he has to take into account a wide range of needs and tastes, while keeping the brand’s corporate identity – says Fransceso Guida – We have therefore created two versions, one with warmer tones – Platinum, and a sportier one – Black Pearl (in the photos the Platinum version). Two basic combinations which are then completed and customized by the owner’s choices in terms of fabrics and furnishing accessories”.

The classic-contemporary style of the Grande S10 interiors represent the natural and coherent evolution of the DNA of the S line.

It is a successful combination of precious timbers and white lacquer that gives brightness and sportiness. Even on the Azimut Grande S10, precious metals were used to emphasize paneling, decorative motifs and furniture tops.

If I had to summarize the peculiarities of this yacht in a slogan, I would say ‘flexibility as a multiplier of space’.

The cockpit-dining-living sequence give an innovative and flexible approach, making it much more usable than the classic solution.

Depending on how the double separation windows open or close (one in the center of the saloon and one in the stern), the dining area can be separated from the living room and open on the cockpit, or totally isolated if you decide to close the aft window.

“In the various spaces we wanted to give continuity to the decoration, in order to obtain a sober and elegant effect”.

The owner’s cabin takes the full beam in the center of the hull, and is 21 square meters large. It features the dimensions and areas of a motoryacht rather than of a sports boat. It sports an area at the entrance with a wet bar, the relaxation-night area in the center, and then walk-in closet and split bathroom.

The VIP cabin at the top of the bow has a diagonal bed, and the whole space expresses an atmosphere of great importance.

Of the other two guest cabins, one sports a transversal double bed, the other two separate beds placed longitudinally. Both are located between the owner and the VIP.

On board the Azimut Grande S10, there’s many of the latest generation technical solutions developed by the Azimut Innovation Lab as part of the ECS – Enhanced Cruising Solutions program. Let’s start with Active Trim Control, which controls the balance during navigation and reduces hydrodynamic resistance thus optimizing consumption.

Azimut Grande S10 also features the Sea Star Eps electronic steering, which can change responsiveness by adjusting the rudder wheel turns and weight, based on cruising speed, without any hydraulic wiring.

In the engine room, two 2600 hp MTUs push the S10 to a top speed of 35 knots. Furthermore, an active ventilation system has been installed, thanks to which the rotation speed of the fans adapts to the actual temperature of the engine room.

The dashboard was created in partnership with Simrad-Naviop and is structured on a block which can rotate to reveal two faces: one shows a series of displays, the other just an extra large screen dedicated to the main monitoring and navigation readings, a mix of video sources and content clusters chosen by the user through the commanders, which consist of two touch screens duplicated by two physical joggers for additional security.

The dashboard design was created by Davide Cipriani‘s CentrostileDesign with reflective curved shapes, highlighted by precious materials and accents of light. It conceals complexity in a simple but surprising design.

The entire superstructure, the flybridge and the hardtop are made in Carbon Tech. The glass above the fore area of the main deck is also technological: made by B, it is a laminated panel that incorporates an electro-optical film based on SPD (Suspended Particles Device) technology: the system is activated by the presence of an electric field capable of orienting suspended particles within the film, so that it can control the solar radiation both in the visible range and in the actual radiation range.

The numbers of Azimut Grande S10 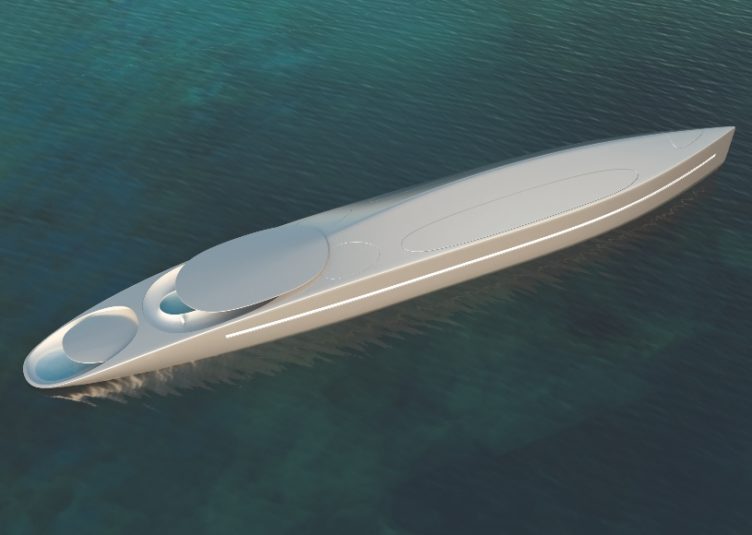 Project L by Thierry Gaugain is the smoothest... 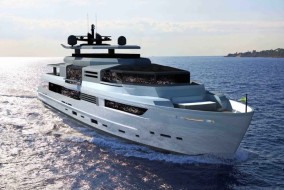 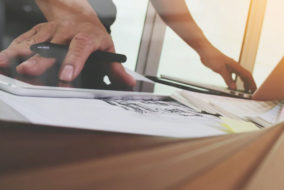 Invictus 320 Atelier: a statement of the customization chances by Invictus Yacht 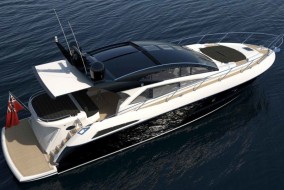